Sponsored by RiskRecon, a Mastercard Company and conducted by Ponemon Institute,1,162 IT and IT security professionals in North America and Western Europe were surveyed for a new study, Data Risk in the Third-Party Ecosystem. All participants in the research are familiar with their organizations’ approach to managing data risks created through outsourcing.  Over the coming weeks we will examine  and discuss the responses in the study.

We broke the survey questions and responses into five categories:

In this blog post, we will look at: Strategic shortfalls in third-party risk management governance

Cybersecurity incidents involving third parties are increasing and third-party data breaches are prevalent. Third-party data breaches can be caused by vendors, suppliers, contractors or business partners that may have weaker security controls than the organizations they provide services to. Stolen data may include sensitive, proprietary or confidential information such as credit card numbers, trade secrets, customer and patient data.

According to the research, 59 percent of respondents confirm that their organizations have experienced a data breach caused by one of their third parties and 54 percent of these respondents say it was as recent as the past 12 months, as shown in Figure 1. Of these respondents, 38 percent say the breach was caused by one of the Nth parties, indicating the flaws in third parties’ security controls in place for their Nth parties.

Figure 1. Has your organization ever and in the past 12 months experienced a data breach or cyber attack caused by a third party?

Figure 2. Who is most accountable for the correct handling of the organization’s third- party risk management program?

Figure 3. Reasons for not regularly reporting third-party risks to the board of directors

Download the study today to see the full results from our research, and stay tuned for our next blog which will look at the lack of visibility into third and Nth parties. 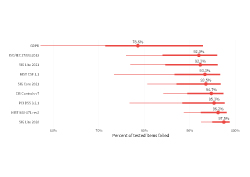 Digging into the realities of noncompliance 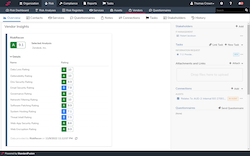